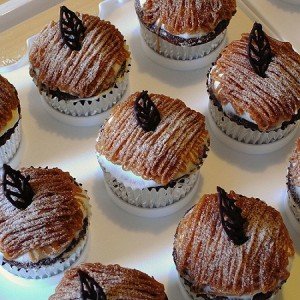 When driving down Scottsdale Road in Scottsdale, Arizona we pass my granddaughter’s favorite store. It brings a smile to my face when I see the cupcake store and it always bring a smile to my face. I would remember the birthday parties I have attended to as a kid, the smudge of icing on our tiny hands and the laughter we shared our friends.

The cupcake craze all started during the 19th century in the United States and has since gained popularity because of its uncomplicated ways of baking as well as the ingredients involved in the making of the cupcake.

Furthermore, they are also convenient because of the little amount of time spent in preparing and cooking, and the ease in remembering the ingredients.

There are a few theories of how that little cake got its name: first, because the ingredients are measured by cup rather than being weighed. It’s as simple as 1234 as these little cakes are made up of a cup of butter, two cups of sugar, three of flour and four the eggs. A recipe that’s easy to remember in every household. Secondly, it was originally bakedin ramekins, molds and pottery cups, thus, the name cupcake.

With creativity and imagination, the old simple cupcake recipe now comes in all shapes, sizes, colors, and of course flavors – A culinary masterpiece. The batter used can be flavored with banana, carrots, chocolates and the likes and some have added ingredients such as fruits, nuts, chocolate chips that are stirred in for more aroma and texture. Cupcakes may also be filled with flavored jellies and whipped cream by scooping a small hole on top of the cake or by injecting the filling with the use of a syringe. They may also be decorated with various patterns topped with frosting of different colors and sprinkled with candies. The variation of these little cakes made an impact, especially with the children. The cupcake is almost a staple at any American get-together such as birthday parties, work functions, anniversaries and weddings.

In recent years, there was a boom of cupcake stores across the country. Cupcakes became more of an industry than a household recipe. After all, this snack can be eaten during any part of the day. The accessibility of having a cupcake store in the neighborhood makes it more convenient just for anyone such as working mothers to serve this delicious dessert to their children, or for a quick gift to a friend. With the wide array of cupcakes available in the market today, prices range from $1.00 to $5.00 a piece.

One of the most loved and sought-after cupcake stores in the US is called the Sprinkles Cupcakes and it’s conveniently located in the heart of Scottsdale AZ. So if you are in the area, don’t miss dropping by and have a taste and indulge your taste buds with this mouth-watering sprinkled cupcake.